Camille Herron (BS ’05) has competed in some of the most grueling 100-mile running races around the world — ones that challenge even the most experienced track and trail runners. But Herron is not your typical athlete. With natural running talent, a background in exercise and sports science and a love for the sport, the 37-year-old has found her stride and crushed four world ultrarunning records (50 miles, 100 miles, 12 hours and 24 hours) in the past three years. Herron is an Oklahoma native who initially enrolled at The University of Tulsa to study biology as a pre-med student and run on the Golden Hurricane cross-country and track and field teams. Heavily recruited by several prominent universities, she showed a lot of promise. But frequent stress fractures plagued her freshman year. Herron red-shirted as a sophomore and transferred to another university before returning to TU to complete her studies.

“I ended up being the very first TURC (Tulsa Undergraduate Research Challenge) student from our department,” Herron said. “Professor Caruso’s background was studying exercise counter-measures during space flight and developing exercise protocols for astronauts. It was a good match because I was interested in researching bone and muscle.”

Herron focused her attention on class, research and community activities. She graduated from TU as a Top 10 Senior. Running had become part of her life again by this time, but only on a recreational level. When her husband, Conor, qualified for the Olympic marathon trials in 2004, she found herself back in the game while training with him.

“I was running further than him — like 70 miles a week for fun,” she said. “He started giving me workouts, and it seemed like the further I ran the stronger I performed.”

Herron continued her bone and exercise research in graduate school at Oregon State University while keeping up with a hefty running schedule. In the lab, she specialized in bone-imaging techniques that eventually led to a job at the University of Oklahoma Center for Health Sciences. Once back in Oklahoma, Herron’s running career accelerated. She made three Olympic marathon trials (2008, 2012, 2016) and became the top American to compete in the Pan-American Olympic Games marathon in 2011.

“I never thought at the time that there’s still more to come,” she said. “I thought the marathon was going to be my event.”

Herron ran and won several back-to-back marathons while working full time in Oklahoma City. She tried her first ultra (any race longer than 26.2 miles) in 2013, but was not convinced the longer distance was her sport. After considering semi-retirement in 2015, she decided to give it one more shot at the 100K US Championship. There, she won with the fastest time in the world for eight years. “It was an amazing feeling, like something I’m meant to do,” Herron said. “It was pretty overwhelming. Suddenly, I was a star. Two or three days later, I was back in the lab doing my job.” Since the rush of her success and popularity in the running world, Herron has acquired an agent and sponsorship from NIKE. Herron strikes a balance with her career and running, working a part-time schedule at the OU Health Sciences Center. In June 2017, she became only the third American in history to win the prestigious Comrades Marathon in South Africa. That race is 56 miles long and the most competitive ultra-marathon in the world.

The science of bones and muscles

“I never thought my body could do what it does now. But between what I learned academically and through the guidance of my husband, I’ve learned how to keep myself healthy,” Herron said.

Freak accidents are always a possibility. But looking back at her time at TU Herron now understands why she suffered so many fractures that hindered competitive running in college. Herron, standing today at 5’10’’, grew nine inches in high school. Her young bones and muscles were not acclimated to such heavy training at 18 years old. Almost 20 years later, she is in the prime of her sport, with science as her secret weapon. 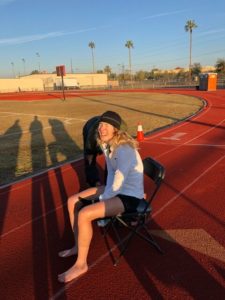 “My muscles were pulling from my bones and causing stress,” she said. “Understanding how to enhance bone and muscle recovery became my academic forte. I can take from my head what’s happening to my body and know how to enhance the processes.”

Running from sunrise to sunset

Herron splits her training into two daily sessions. She has averaged more than 100 miles per week since 2006.

“To be able to run all day is exciting because you’re literally going from sunrise to sunset,” she said. “I like to feel like I’m becoming one with the environment around me while enjoying the scenery and people.” When asked what keeps her going during those last few grueling miles of a race, Herron said she relies on her body’s strength while drawing on mental power to cross the finish line.

“I think about how I felt in my hardest workout and dig extra deep,” she said. “I try to stay positive and think about all of the things I’ve overcome.”

If Herron’s story inspires you, consider enrolling in TU’s exercise and sports science program to further your knowledge and career goals.