TU Professors Greg Gardner and Ron Walker spent two weeks in Amman, Jordan, in December as a key step in the Qusai Initiative on behalf of the World Federation of Athletic Training and Therapy (WFATT). The project was funded by the Office of the Crown Prince of Jordan as part of the Qusai Initiative, a targeted effort aimed at improving the care available to Jordanian athletes and at preventing catastrophic injury and/or death in these athletes. The initiative is named after a promising 19-year-old Jordanian National Team football (soccer) athlete who died during a match. Gardner is the U.S. vice president of the WFATT and began working with members of the Jordanian Sports Therapy Federation on the project in June of 2016.

During the two-week visit, Gardner and Walker provided a 40-hour introductory training course for recent physiotherapy graduates and reviewed the existing education and credentialing processes, the Jordanian Olympic Committee’s policies and member federations, as well as the polices of the Jordanian Football Association. “The students were more motivated and engaged than any I have ever worked with,” said Walker.

The two also consulted extensively with the Jordanian Olympic Committee on a new sports medicine facility they are building. “Getting to suggest changes in the development of the new Jordanian Olympic Committee sports medicine facility and then watching those changes as they were incorporated into the blueprints was a great career moment for me,” said Gardner.

Their visit included trips to Hashemite University, Jordan University of Science and Technology and the Prince Hussein Bin Abdullah II Academy of Civil Protection, where Walker and Gardner met with faculty members and administrators and evaluated existing educational programs for training sports therapists in Jordan. 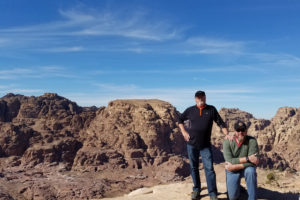 One day of the trip was set aside for sightseeing. “Our day included bucket list experiences such as seeing Petra and enjoying a Bedouin-style meal in Wadi Rum,” said Walker. Gardner added that, “The hospitality of the Jordanians is legendary. They didn’t take us out for dinner; they welcomed us into their home.”

At the conclusion of the visit, the WFATT provided a summary of findings with recommendations for improvements and is continuing to work with multiple agencies and offices associated with athletic health care in Jordan.